The off season is a great time to focus on improving your athleticism and target areas you want to improve upon.  Almost all athletes want to increase their strength and power output.  The vertical jump is a measure of power and increasing it will enhance your performance in almost any sport.  It doesn’t matter if you are a basketball, volleyball, football or soccer player, increasing your vertical jump and power will improve your chances for success. 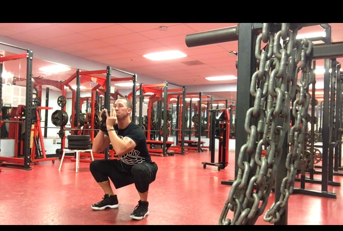 The squat is the No. 1 movement in all of my strength programs, including my basketball program. I tell my players that athletes are built from the ground up. If they want to run fast and jump high, they must have a strong base, and that all starts with the squat exercise.

The squat exercise has gotten a bad reputation from some basketball strength coaches and physical therapists who believe that tall players shouldn’t squat because they cannot do it properly. When I say the squat exercise is the No. 1 movement in my strength program, I am not talking only about the back squat. Depending on their current level, my athletes may use a front squat, a goblet or dumbbell squat, or just an air squat. Additionally, I love the rear foot elevated split squat for my athletes. We put all of our athletes through a squat progression and only advance them when they’ve demonstrated proficiency in each movement.

Vertical jumping is a measurement of power, so the more an athlete can enhance their power, the greater their jumping ability will be. Force is a component of the power equation. The squat exercise will enhance an athlete’s force production capabilities during the hip and knee flexion and extensions, which are vital for jumping. Additionally, the squat increases leg-strength-to-bodyweight ratio, an important component in an athlete’s ability to accelerate, decelerate, produce power, and elevate themselves into the air.

Simply put, if an athlete wants to — jump higher, run faster, stop in less time, and change direction quicker — they need to produce more force. Squats have a direct effect on these skills and the force needed to excel at them.

So start squatting and enjoy the benefits of improved athleticism!

1. Push the hips back
2. Keep chest up and back flat
3. Sit back toward your heels
4. As you go down, push your knees away from each other
5. Control the squat on the way down and come up faster

The cues are the same except you want to hold the weighted object at shoulder height. Keep the arms tight to the upper body. Now since you have a weight in front of you, the athlete can really sit back into the squat.

The cues are the same except you want to hold the barbell on your shoulders. The bar should rest on the front of the shoulders and clavicles. Keep your elbows up so the bar stays in good position.

The cues are the same except the bar should rest on the back of the shoulders at the base of the neck. The scapula should be retracted.

1. Hop the front foot out so your knee stays behind your toe as you descend
2. Push the hips back as you descend
3. Keep chest up and back flat
4. Top of thigh should be parallel to the ground